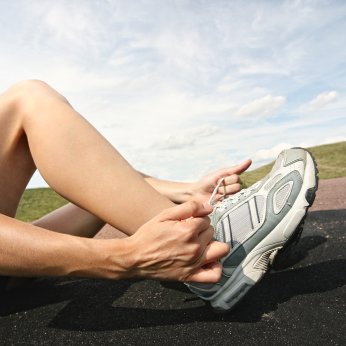 Don’t you hate it when you have to change the batteries in your shoes?

What a nuisance: you’re all set to go jogging when the low-battery warning light stops you in your tracks. Now you’ve got the find the stupid little batteries rolling around in the kitchen drawer, open up your shoe, remove the dead batteries, remember which way the new ones go in, and properly dispose of the old batteries. Can’t a person just have a pleasant walk without all this tribulation?

Well, rejoice, because Texas Instruments has your solution. This little slice of heaven is called the MSP430FR57xx series. If you’re a TI part number aficionado you’ll recognize this alphanumeric sonnet as one of TI’s MSP430 microcontrollers. The MSP430, to the uninitiated, is a “digital signal microcontroller,” a kind of low-cost chip that combines some signal-processing functions with those of your garden-variety MCU.

What makes the new FR57xx branch of the family tree so interesting, you ask? It’s TI’s new secret ingredient: FRAM. Yes, technology fans, ferroelectric random-access memory has made its way into mainstream microcontrollers.

FRAM takes the place of the flash memory found in most microcontrollers, including TI’s own. It’s nonvolatile like flash, but much faster. In fact, at around 10 ms per write cycle, it’s almost as fast as SRAM. Flash, in comparison, can take nearly a full second to erase and rewrite, so FRAM is orders of magnitude quicker. It’s fast enough, in fact, to be used like on-chip SRAM. You can execute code directly out of the chip’s FRAM, which is something you can’t always do with flash or EEPROM.

FRAM also takes less energy to access, since it doesn’t need the high write currents of flash memory or EEPROM. Plan on about 1mA active power at 10 MHz, versus double that (or more) for flash, and hundreds of times more power for EEPROM.

Here’s where the running shoes come in. TI figures the new FR57xx chips use so little energy that they can be permanently buried inside an end product: a truly embedded microcontroller. Systems with battery-backed SRAMs need to have their batteries recharged and/or replaced periodically, and systems with flash or EEPROM have limited erase/write cycles and slow access times. But FRAM-based MCUs are both quick and power-efficient, so they might never need maintenance. The company foresees its shiny new MCUs getting buried in concrete bridge trusses, tall buildings, and distant monitoring stations—all applications where you might need an embedded microcontroller but don’t ever want to see it again.

There will be six variations of the FR57xx family initially: all permutations of three memory sizes and two clock speeds. You can get 4K, 8K, or 16K of FRAM and either 8 MHz or 24 MHz of screaming MSP430 performance. Prices for the slowest, smallest version start at a buck-twenty if you buy them in sacks of 10,000 units.

Because the FRAM is nearly as fast as SRAM, there’s no need to have both on the same chip. Consequently, all the new FR57xx chips have just a single big block of FRAM: no SRAM, no flash, no EEPROM. You can choose to partition that any way you like between code space and data storage.

Since you’re executing from nonvolatile memory (and using nonvolatile data storage) all the time, you’ve got some intriguing new design possibilities. You could yank the power to the chip anytime you want, and it would freeze in state. You might lose some internal register information, but everything else would stay right where you left it. With a little careful planning, you could get pretty aggressive about powering-down your system in between tasks, or between interrupts. A monitoring system, for example, could wake up and sample its sensors once a second but go completely dead the rest of the time, all without any special effort to save or restore system state.

Like most MSP430 devices, the new FR57xx chips come with a full boat of on-chip peripherals. Slated to appear are UARTs (also usable for IrDA or SPI), 12 channels of analog/digital conversion, I2C, bit-addressable I/O ports, and lots of timers.

Why TI’s sudden move into FRAM technology? Well for starters, it’s not sudden. The company has been quietly fabricating standalone FRAM memory chips for Ramtron for many years, but those chips were always sold under Ramton’s name. TI is simply taking that technology and moving it into its own MCU product line. Presumably, their commercial agreement prohibits TI from making and selling memory chips that would compete with Ramtron, while the latter company is likely prevented from marketing microcontrollers. The two firms get to share technology without stepping on each other’s toes.

Does this signal TI’s departure from the flash-based MCU market? Nope. The company plans to keep making more and better MSP430 chips with flash memory. Some customers prefer flash, and some require extended temperature ranges that FRAM can’t currently provide. For my money, though, FRAM is the better alternative.

Compared to flash, FRAM is faster and more power-efficient, which we’ve already covered. It’s also bit- and byte-addressable, which most flash-based microcontrollers can’t handle. More importantly, you don’t have to erase FRAM before you use it; you just treat it like SRAM that doesn’t forget. That means no erase/write protocol, no timing loops, and no delays while the memory does its thing. FRAM tolerates a zillion write cycles, compared to only a few thousand for flash, so you don’t have to spread out your usage to avoid fatiguing the device. In short, FRAM is way easier to use.

The single memory partition on the FR57xx devices is also nice, both for programmers and for TI itself. You never have to think, “Gee, how much SRAM do I need versus how much nonvolatile memory?” You simply buy the chip that has enough overall memory and worry about how (or even if) you’re going to partition it later. That means you don’t need to pick the right-sized device (and hope that it remains in production), and TI doesn’t have to worry about stocking so many variations. One size pretty much fits all.