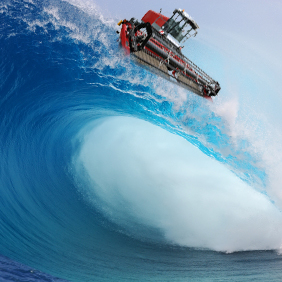 It’s a neat trick: the switch for the light is a self contained unit, with no external wires or internal battery. Simply toggling the light switch generates enough power to send an RF signal to a control unit to turn on, or off, the light. More broadly, the switch could be a button, and the signal sent could be used to control almost anything.

The company behind this approach is EnOcean, a spin-off from Siemens based just to the south of Munich. The company philosophy is that there is an ocean of “free” energy that is just waiting to be exploited. Hence the name – En(ergy)Ocean. This energy is not just that generated by a mechanical means, including vibrations, but also includes light/solar energy or electricity generated by temperature difference.

In less than ten years, EnOcean has created a standard communication protocol, a set of energy harvesting interfaces, communications chips, integrated modules and development kits. Perhaps more importantly, the EnOcean Alliance has developed into an ecosystem of companies (already over 150) using the technology to build products and deploy applications. The EnOcean Alliance seems to be concentrating on building automation, and it claims that there are over 100,000 buildings incorporating EnOcean products. EnOcean itself is keen to push the technology into other areas, such as monitoring manufacturing machinery.

There are two halves to the EnOcean story: energy harvesting and the wireless communication.

We will look first at the wireless communication, and then return to the energy harvesting. There have been a number of approaches to wireless communication over the years, since there are clearly significant advantages in removing cables from walls. Copper is expensive, and building it into a new building requires effort. It is also inflexible – even moving a light switch in the home is time consuming and messy. For sending and receiving simple information, such as that from our light switch or from a controller for heating and air conditioning, wireless has the bandwidth and reliability needed.

Previous wireless approaches have been battery powered and have developed complex protocols. EnOcean and the EnOcean Alliance have developed a simple protocol, which is being evaluated as an IEC standard. It uses sub-gigahertz frequencies: 868 MHz in Europe and the Middle East, and 315 MHz in the USA and the Far East. These lower frequencies exhibit lower attenuation through walls and achieve about twice the range for the same transmitting power as the 2.4 GHz band used by standards like 802.15.4 RF radios, ZigBee, and Bluetooth.

Transmission is in small packets called, in EnOcean speak, Telegrams. Telegrams can be of different lengths, defined by the type of equipment sending the signal. The on-off switch requires only a short Telegram, which is easily powered by the short energy harvesting cycle. More complex equipment, such as climate controls, require longer Telegrams and are normally powered by solar energy with a small energy storage system. The profile of the equipment is specified in the Telegram’s header, and the contents of the following bytes are interpreted according to the type of equipment.

One of the drawbacks of wireless communication is the relatively short range and the limited bandwidth. (EnOcean operates up to 30 m (100 ft) within buildings and about ten times further in the open.) There are several wired protocols, such as KNX (IS/IEC 14543-3-x), BACNet (ISO 16484-5:2003), and LonWorks (ANSI/CEA-709.1-B) for building management, for controlling heating and ventilation, security etc. The EnOcean Alliance has partnered with their equivalent bodies for these standards (such as LonMark International) to ensure interoperability and making it possible to use the strengths of wireless and wired communications where most appropriate. Normally the wired service is used to provide a backbone, linking multiple locally operating EnOcean systems.

The EnOcean Alliance has also created a guide to meeting the US Green Building Council’s LEED, or Leadership in Energy and Environmental Design, Rating Systems.

The strength of EnOcean is that, unlike other wireless protocols, it doesn’t use batteries, relying on a wide range of energy harvesting techniques. The push-button switch uses electrodynamic energy conversion, generating power through a core moving through a coil. This creates energy only while the movement is taking place, but this powers a communications module for enough time for it to send a Telegram to a receiver.

Other energy harvesting technologies could be silicon solar cells connected to a small energy storage system, piezo-electric generated power, or the current generated by having two points in a circuit at different temperatures. (Apparently a 1° Celsius differential can power a wireless sensor, and >10° temperature differential can be used to power sensors with the intelligence to carry out tasks like analysing oscillations.) EnOcean also talks about energy harvesting from vibrations, for example those inherent in manufacturing machinery, or rotation, from a wheel or an electric motor.

EnOcean, having developed the energy harvesting sensors, supports them with a range of silicon products. At the harvesting point are communication modules. Some are very simple; for example, those for on-off type actions, while others are more complex; for example, a solar powered device for room control might include two way communication, a microcontroller, a timer for device wake-up and a driver for a display, as well as circuitry for energy conversions and storage.

Signals sent from the sensors have to be received, and again there is a range of devices, from a very simple single switch actuator, that will turn mains’ voltages on and off when it receives a signal, to more complex devices that can act as repeaters for wirelessly complex areas, to head end equipment to pass the signals to other applications.

Backing these are development kits and a family of modules that provide a flying start to development, plus software, software stacks, and drivers.

Developers have taken these elements and created products, which, as we noted earlier, are installed in over 100,000 buildings already. Applications within buildings include lighting, heating and air conditioning, motion sensing, and the control of windows and blinds. One interesting application is in the NH hotel chain, where pushing the key-card into a holder in the hotel bedroom transmits a wireless signal, turning on energy to lighting, power sockets, heating and climate control. Such devices already exist based on wired solutions: using the wireless version makes retrofitting simple, and the hotel chain claims that it is saving up to 20% on energy, with the installation taking place in a few hours per room – sometimes between one guest checking out and the next checking in.

Outside the building area, EnOcean is continuing to evaluate other applications. Manufacturing equipment monitoring and control powered by the vibration of the machine itself and monitoring and reading utility meters are two areas they have studied recently.

My first thought when I heard about this was, “Isn’t this rather like ZigBee?” But there are two differences, one technological, the other political. EnOcean’s approach doesn’t require batteries, which are intrinsic to the ZigBee standard. And EnOcean has, to be fair, been driven initially by a single company. It is rather reminiscent of Apple, where a single set of standards has simplified things and caused third parties to swing into line. ZigBee reminds me of C, where a standard has been created by many different companies and interest groups, each with their own agenda, which they are anxious to see reflected or enabled in the standard.

I like EnOcean and I think that the approach is only the beginning of an exciting and fun area. So far as I know, no one is looking at EnOcean for the desktop: how about an EnOcean mouse? You use a lot of energy moving a mouse around, after all. I won’t want any royalties – just someone to make it.