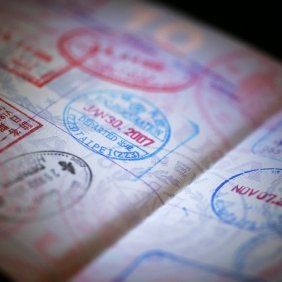 Bringing Together Two Points of View

He had been following this guy for about five miles, and his legs were starting to get tired. But he couldn’t let that distract him; if he were noticed now, it would blow the entire investigation. Hanging back just a bit in the shadows, he gave up some distance and then started forward again. But, from around the corner, a policeman stepped in front of him and in a slightly suspicious, insinuating tone, asked, “Est-ce que je vous pourrais aider, peut-être?”

Reflexively, he pulled out a badge and said, “Ik ben rechercheur met…” and then realized that this wasn’t going to work. He wasn’t in Flanders anymore; he had crossed into Wallonia. And even though “rechercheur” came from French, it would carry implications more of research than detective work, and, even if understood, his Walloon counterpart wouldn’t be willing to acknowledge any such understanding, given its contamination by Dut… er… Flemish usage.

So here they were again, at the usual impasse. Since neither would be willing to stoop to communicating in the language of the other, they had to resort to the usual tactic of a mutual third language, English. “I can, perhaps, be of some assistance, yes?” suggested the French-speaking policeman.

“Look, I’m a detective with the Leuven police. I’ve been following this guy for the last couple hours and desperately need to find out where he’s going. A year’s worth of work could be ruined if I lose him.”

“Ah, but of course, it must be very important, I’m sure. So you would appreciate the help that my team can bring since you are now in our jurisdiction. Perhaps you should give us what information you have so that we can follow him within Wallonia and report back to you, yes?”

“Are you serious? How could I give you so much information in time to keep up with him?” he asked brusquely, betraying some of the directness inherited, albeit in attenuated form, from the Dutch. “You’ve slowed me down too much already, I’m about to lose sight of him. Just let me do my work.”

The Walloon sidestepped back in front of the Flemish detective, saying, “Oh, I’m sure it would be much more useful if you could give us a copy of all of your notes so that we could, how do they say, pick up the scent?”

“Don’t be a fool, I don’t have all the notes, and they’re all written in Flemish anyway, so you wouldn’t be able – or willing – to do anything with them until they were translated into French. And your team would do all their work in French, which would be of no use to my team until we translated it back into Flemish. This will take forever. It’s ridiculous. I’m in a hurry. It’s all Belgium, after all!”

“Ah yes,” came the silky reply. “These things can be difficult, n’est-ce pas? There is usually not so much Belgian unity unless convenient, hè?” he said, intentionally emphasizing the last bit, as if to mock the ubiquitous Dutch interjection. “It can be not so easy to trace someone from one side to the other and then back again. But, truly, you have not so much choice but to do things the Walloon way when in Wallonia and the Flemish way when in Flanders, yes? So, we should get started?”

It’s natural for the members of a particular discipline to develop their own language, their own data formats, their own tools, even their own culture, as reflected in the customary ways of doing things.

On the IC side of things, you’ve got the standard electrical CAD tools that talk in terms of behaviors and reduce those to electrical manifestations of those behaviors as represented by the polygons encoded in a GDS-II file.

On the PC board side of things, you have mechanical and thermal considerations that are managed by a completely separate set of tools, ultimately resulting in a collection of geometries ensconced in a Gerber plot.

IC designers have debug tools that allow problems to be identified within the IC. Such errors can be traced back to their source, whether due to a behavior, timing, or even a yield issue.

PC board designs have separate tools that allow any connectivity or other issues to be traced and fixed.

So what’s an FA person supposed to do??

Magma has announced their BoardView product, which is aimed at solving this problem. It lets you trace signals from the die all the way out to the board or the other way around. You can also hook things up to equipment for imaging or probing purposes, allowing a particular piece of circuitry to be identified by its coordinates for positioning, whether in the chip or on the board.

BoardView is an extension of Magma’s Camelot product, which cross-correlates circuit information with physical location for easier failure analysis. It allows that methodology to push beyond the edge of the die out to the package, module, or board.

It’s a beta product at the moment, with the technology foundations in place. Strictly speaking, Camelot provides the chip view and BoardView provides the, well, board view [file under “t” for “things that don’t really need explaining”…]. But at the end of Q1, when the product is finally released, the GUIs should all be in place to unify the ability to view chip or board in a single tool.

It’s as if Flanders and Wallonia finally agreed to operate as a single country called Belgium. (After all, this doesn’t require them to integrate their neighborhoods…) Perhaps some rebranding is in order here. Magma should have a set of board tools called, oh, Wallonia. And a set of chip tools called Flanders. And BoardView can then be renamed Belgium.