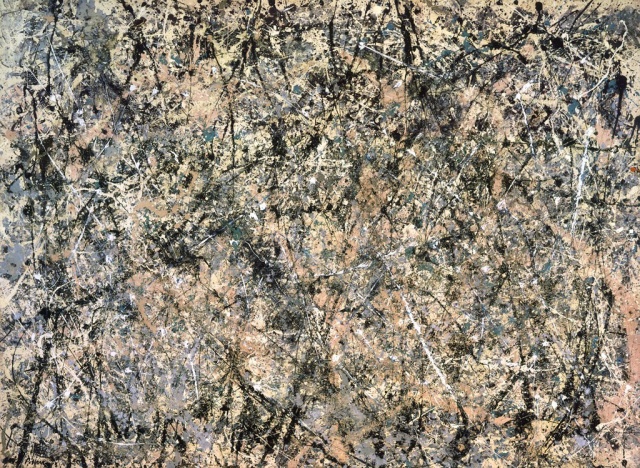 Lior Shamir, a computer scientist at Lawrence Technological University, has taken a series of image analysis algorithms and shown that they can discriminate between real Pollocks and pieces painted in an attempt to mimic his style…

First, the software runs through a variety of processes that identify basic features of the image such as “textures, colors, edges, shapes, fractals, polynomial decomposition of the image, and statistical distribution of the pixel intensities.” Next, it performs various transformations on the image (Fourier transforms, wavelet analysis, and so on), and computes values from those.

By comparing multiple images from a single source, it identifies the individual computations that provide the most consistent information about the source. Then, given a new image from an unknown source, it performs the same calculations and sees if the results are similar to its training set or not. If they’re sufficiently similar, the work is likely to be in the same style as the artist’s and probably by the artist him or herself.
via Ars Technica

What the Heck Is Convolution?
[From the last episode: We looked at CNNs for vision as well as other neural networks for other applications.] We're going to take a quick detour into math today. For those of you that have done advanced math, this may be a review, or it might even seem to be talking down...
More from Inside the IoT...

Masking and the C/C++ Bitwise Operators
Using the bitwise operators in general -- and employing them to perform masking, bit testing, and bit setting/clearing operations in particular -- can be extremely efficacious....
More from Max\'s Cool Beans...

Here are the June 2020 Website Updates to Samtec.com
In June, we continued to upgrade several key pieces of content across the website, including more interactive product explorers on several pages and a homepage refresh. We also made a significant update to our product pages which allows logged-in users to see customer-specifi...
More from Samtec, Inc....